You need tologinorregisterto add to your favorites.

The learner eater from around six months

The choice of your baby’s first solid food is very important. It must be suitable for her developing digestive system and be finely textured and easy to swallow. The time at which a baby accepts solid food varies from child to child. The introduction of solid foods should be determined by the baby’s stage of development, rather than by age alone.

Your baby is entering the Learner Eater stage when she can:

In the Learner Eater stage, your baby’s diet is still mainly milk feed (breast milk or infant formula), but milk feed alone can no longer meet her energy needs. Iron reserves are also being depleted.

Your baby is ready to learn about eating when...

Until your baby can express these feelings and actions, feeding solids may be a form of force-feeding.

Until your baby can express these feelings and actions, feeding solids may be a form of force-feeding.

First steps in giving solids to the Learner Eater

The early tastes (first week) of solid foods are intended more for education than for nutrition. During the first year, milk feed still constitutes the major part of the diet.
The milk feed he drinks will provide almost all the protein, minerals and vitamins that he needs, even when his milk feed intake is reduced because he wants more solid foods. Offer small, baby-sized servings of 1–2 teaspoons at each feed and increase this gradually to portions of 2–4 tablespoons after the milk feed.

Avoid strong tastes such as broccoli or cabbage as a starter food. Introduce them at a later stage.
The kind of infant cereal will determine what it should be mixed with: either the current milk feed (Nestlé NESTUM) or previously boiled and cooled water (Nestlé CERELAC). Mix it to a soft, slightly runny consistency. A mixture that is too stiff may make your baby gag. Do not add salt or sugar when preparing strained fruit or vegetables.
Add Nestlé NESTUM to foods such as pumpkin and potato to enhance their nutritional value, throughout the first three years of life.

Introduce one food at a time

The tendency to develop allergies is hereditary. An allergy will generally not manifest itself noticeably on the first occasion that the baby encounters the allergen, it is always wise to start with one new food at a time, over a period of approximately 3–5 days. In this way, you can immediately identify any adverse reactions. Eliminate foods that provoke an allergenic reaction and consult a health professional to ensure the baby’s diet remains nutritionally adequate. This systematic approach generally takes a minimum of one to one-and-a-half months between starting new food groups.

Never force-feed your baby with solid foods. It is normal for babies to accept new foods only after several attempts. Once your baby is familiar with the food, it may become a ‘favourite’ food; a bitter taste, such as a green vegetable, is such an example. Offer your baby a few teaspoons of vegetables in the same meal as a cereal feed. Once he is used to the veggies, start with fruit. This will establish healthy eating habits from an early age.

Babies often spit out their first semi-solid food rather violently – not because they do not want the food, but because the tongue motion used in sucking is the only motion they know. They must learn an entirely new feeding technique. You will be splattered with the food if their first efforts fail. This could be your first feeding disaster and you may be quite upset. If you laugh at these efforts, your baby may learn to do it to make you laugh. You should prepare yourself to remain undisturbed by these types of feeding incidents.

Healthy, hungry children will eat if they are given a calm atmosphere in which to do so. This is the first and most important consideration. It is unwise to introduce solid foods when you or your baby are overtired – your child probably needs the rest more than the meal. 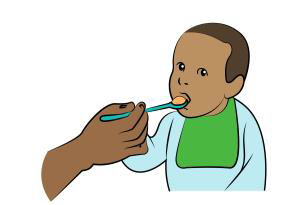 Hold a tiny spoon to the baby’s lips and let him suck off the content. He will get enough to taste and, if he likes it, he will go on eating. 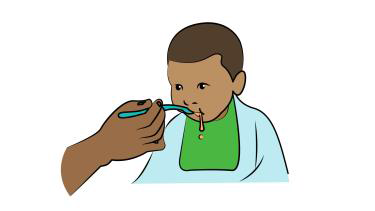 Do not put the food on the front of your baby’s tongue, as it will simply dribble out again. He cannot push back far enough to taste or swallow. You will both be frustrated. 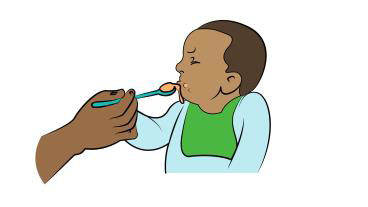 Do not put too much food on the spoon or put it too far back in your baby’s mouth. This forces him to swallow with no chance to refuse the food and he may gag. 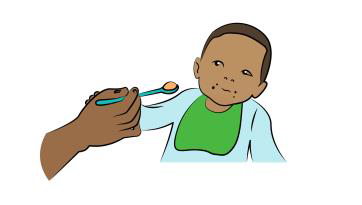 Do not force him to eat. Let him suck the food from the spoon. Stop feeding if the taste makes him cry or when his closed lips say ‘enough’.

How much should I feed my baby?

Many mothers ask this question, but absolute quantities are not helpful.

It is important to know when to start and when to stop feeding. You baby’s behaviour will show you when she is satisfied.

The Explorer Eater from around seven months

When your baby has successfully learned to eat solid food, he is ready to explore new tastes.

The Confident Eater from around nine months

As your baby develops his chewing and swallowing ability, he is now ready to take on more challenging, richer tastes and textures.

Why do we introduce solids to a babys diet

About halfway through the first year of life, babies begin to outgrow their liquid diet, which no longer supply them with enough nutrients to support their rate of growth.

How to handle choking

A new texture, taken for the first time, may make your baby gag out of surprise. If she does, straddle her over your forearm, with her head lower than her body and supported on your thigh.

Around 8-10 months, increase the variety and texture of foods for your baby.

At seven to eight months

Look out, baby’s on the move!

Around 10-12 months, babies are ready for harder finger foods & self-feeding.

When do we introduce solids to the diet

It is too early to introduce solids if your baby:

Your baby sits alone and pivots into a crawling position. He crawls on extended limbs and holds on to furniture to pull himself up to stand.

This sample day was created by registered dieticians to help meet the nutrition goals for your 6 to 7 month old baby.

Reducing the risk of allergy

There is an increased risk of allergy when solids are introduced too early, i.e. before

Setting the stage for his first taste

Here are a few tips for getting your baby ready to take that first spoonful of baby food.

The birth of an iconic brand

The birth of an iconic brand conquering the world

Nestlé is your trusted partner, guiding you and your baby on your journey of the critical first 1 000 days, from conception to your baby’s second birthday. We can’t wait to share this exciting journey with you.

Important Notice: The World Health Organisation (WHO*) has recommended that pregnant women and new mothers be informed on the benefits and superiority of breastfeeding -in particular that it provides the best nutrition and protection from illness for babies.

Mothers should be given guidance on the preparation for, and maintenance of lactation with special emphasis on the importance of a well-balanced diet both during pregnancy and after delivery. Unnecessary introduction of partial bottle feeding or other foods and drinks should be discouraged since it will be a negative effect on breastfeeding. Similarly, mothers should be warned of the difficulty of reversing a decision not to breastfeed.

Before advising mother to use an infant formula, she should be advised of the social and financial implications of her decision: for example, if a baby is exclusively bottlefed, more than one can (450g) per week will be needed, so the family circumstances and costs should be kept in mind. Mothers should be reminded that breastmilk is not only the best, but also the most economical food for babies. If a decision to use an infant formula is taken, it is important to give instructions on correct preparation methods, emphasizing that unboiled water, unsterilized bottles or incorrect dilution can all lead to illness.

Infant Cereals, Meals & Drinks Important Notice: The World Health Organisation (WHO) recommends exclusive breastfeeding during the first 6 months of life. Consult your doctor for advice on when to introduce complementary foods to your baby. Breastfeeding should continue for as long as possible after introduction of complementary foods.