You need tologinorregisterto add to your favorites.

At this stage, baby’s development is on ‘fast-forward’. It’s an ideal time for sitting up and looking around. So, what’s the most interesting thing for baby right now? Baby’s mouth! It’s a great exploring tool - and little fingers fit in there so well.

At six months he puts his hand in his mouth.

LANGUAGE SKILLS
Begins to babble in series of different sounds. He starts to imitate sounds. He may vocalise tunefully and should respond well to a hearing test.

CRYING
By now, baby will be an experienced crier. During the first nine months, crying is baby’s best way of communicating. Comforting baby every time he cries will not spoil him. Baby will learn that you are attentive and ready to respond to his needs. It’s a good idea to speak with your doctor if you are concerned about baby’s crying.

NAPPIES
Starting solids can change the colour and texture of baby’s stools. It can also change how often baby has a bowel movement. Babies don’t need to have a bowel movement every day. If stools are soft and easy to pass, there is no need for concern.. 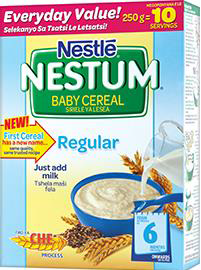 Emotional development in Your Baby

Your baby is discovering their emotions from birth.

How a baby is fed may be as important as what foods are offered. Your baby is growing in leaps and bounds.

You cannot fast-track the stages of your baby’s development, but you can help by creating a stimulating environment.

Why do we introduce solids to a babys diet

About halfway through the first year of life, babies begin to outgrow their liquid diet, which no longer supply them with enough nutrients to support their rate of growth.

How to handle choking

A new texture, taken for the first time, may make your baby gag out of surprise. If she does, straddle her over your forearm, with her head lower than her body and supported on your thigh.

Did you know…. More than 8000 years ago our ancestors made bread, beer and wine through fermentation.

Around 8-10 months, increase the variety and texture of foods for your baby.

The adult’s role is to provide children with nutritious foods. Adults are responsible for what and when their children are fed.

At seven to eight months

Look out, baby’s on the move!

Around 10-12 months, babies are ready for harder finger foods & self-feeding.

When do we introduce solids to the diet

It is too early to introduce solids if your baby:

Your baby sits alone and pivots into a crawling position. He crawls on extended limbs and holds on to furniture to pull himself up to stand.

This sample day was created by registered dieticians to help meet the nutrition goals for your 6 to 7 month old baby.

Your guide to starting solids

Reducing the risk of allergy

There is an increased risk of allergy when solids are introduced too early, i.e. before

Nestlé is your trusted partner, guiding you and your baby on your journey of the critical first 1 000 days, from conception to your baby’s second birthday. We can’t wait to share this exciting journey with you.

Important Notice: The World Health Organisation (WHO*) has recommended that pregnant women and new mothers be informed on the benefits and superiority of breastfeeding -in particular that it provides the best nutrition and protection from illness for babies.

Mothers should be given guidance on the preparation for, and maintenance of lactation with special emphasis on the importance of a well-balanced diet both during pregnancy and after delivery. Unnecessary introduction of partial bottle feeding or other foods and drinks should be discouraged since it will be a negative effect on breastfeeding. Similarly, mothers should be warned of the difficulty of reversing a decision not to breastfeed.

Before advising mother to use an infant formula, she should be advised of the social and financial implications of her decision: for example, if a baby is exclusively bottlefed, more than one can (450g) per week will be needed, so the family circumstances and costs should be kept in mind. Mothers should be reminded that breastmilk is not only the best, but also the most economical food for babies. If a decision to use an infant formula is taken, it is important to give instructions on correct preparation methods, emphasizing that unboiled water, unsterilized bottles or incorrect dilution can all lead to illness.

Infant Cereals, Meals & Drinks Important Notice: The World Health Organisation (WHO) recommends exclusive breastfeeding during the first 6 months of life. Consult your doctor for advice on when to introduce complementary foods to your baby. Breastfeeding should continue for as long as possible after introduction of complementary foods.